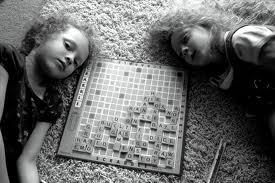 One game too many. At least they went down together!

Recently I’ve been lucky enough to upgrade my phone from a fairly standard texting phone to a smart phone.  It was quite the culture shock. All those years I’d been using my phone for making calls, sending texts, and occasionally checking email when I could have been using it for all of that plus punching into work, keeping a diary, checking on movies, logging workouts, and, of course, the ultimate time killer, playing games with friends.

One of my first apps was Words With Friends.  If you don’t know what this is, its just a game of Scrabble on your phone that you play against a friend of your choice, given they have the app and accept your challenge. You play a word and then wait until your opponent counters with a word of their own.  Then, you play again.  The games can go on for hours, days, or even weeks, and when they’re over, there’s usually a rematch.

Soon after starting Words, I also added Hanging With Friends, the same idea only playing hangman instead of Scrabble. The games are pretty fun, and they have some bonuses.  Thanks to a chat feature, you stay somewhat in touch with the people you play against and get to interact about the game your playing or anything else.  Also, some doctors have recommended playing Words for enhancing mental acuity and preventing memory loss.   The downside is, atleast for me, that both games are highly addicting.

Before I knew it, I was playing four or five games of Words and three games of Hanging simultaneously.  Each time one of my opponents made a move, I’d get a notification from the app, and I was answering moves in games like I answer texts.  Incidentally, I missed answering a few actual texts during this time period.  Any spare time I had was somewhat distracted by my attempts to out manuever my friends.  I was a word game fiend.

Finally, I crashed.  I got tired of it all, deleted my Words app, and turned off notifications for Hanging.  After tapering down the rematches last week, my gaming habit became much more manageable.

Now I am putting in place a strict policy of only playing the game on weekends when I really don’t have something else I need to do.  My goal this week is to use my phone to make my everyday tasks easier, more organized, and more productive, not to take time away from accomplishing them.