We may not all get the birds and the bees lesson, we may not all get the stand up for your rights speech, but one talk I can assure you every girl has heard at least once in her life is the top of the tree apple story.  It always comes after the heartbreak of an unrequited crush. 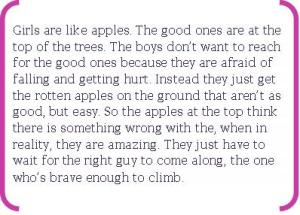 Who can resist such a sentiment?  It explains everything so simply, and no one’s really at fault.   The girl’s perfect, a beautiful apple that’s a challenge to get to. The guy’s only problem is that he’s scared of falling too hard (who can blame him for that?).  The only issue is that the girl has to be patient waiting for the worthy one to come and pick her up. Some version of this idea is offered to any girl feeling spurned.

While this anecdote may serve the moment alright, it does little for a girl in the long run, because it has too many discomforting underlying themes and too many holes in logic.

For instance, it states implicitly that rotten apples get guys, and that an amazing apple isn’t worth the climb to most boys.  And in the real world, what happens when faced with the other prevailing lesson we learn, that if you’re single too long, then you’re single for a reason?  The world at large doesn’t view the apple at the top as the prize apple so much, but more as the apple that won’t come loose or that isn’t quite appetizing enough to make someone want to make the climb.  Looking around, it’s apparent that there are many non-rotten and non-amazing apples that haven’t been picked, and not all are so hard to get to. Also, it’s rare that no one tries to pick the amazing apple, more often than not, it’s that the ones the apple wants won’t pick her. Sometimes the apple may think she’s rotten by the way some people try to pick her.

Alright, I’m done talking in this analogy. In fact, unless an analogy comes from sports, I have a tough time believing it. (Side note here, if it’s a sports analogy it’s probably pretty good, because sports mirror life). However, I do think I’ve come up with a sport-less, fruit-less gem, which I’ll share with you after we go over the facts of why guys don’t pick girls. Six guys shared their opinions about why they don’t pick certain girls, and they all followed similar lines.

Fact #1: He doesn’t want her. We learned this lesson so well with He’s Just Not That Into You.  This is the reason we really don’t want to believe, but is always dreaded in the backs of our minds. It is a very real possibility.  Anything from your personality to your looks to your reputation is, unfortunately, not doing it for him. Most guys I asked had been in this scenario. One guy elaborated on one such experience. “It was a combination of her sort of desperateness or over eagerness that turned me off, because it seemed pathetic, and I didn’t find her physically attractive,” he explained.  After a brief pause he thoughtfully  elaborated, “But if I had found her physically attractive I probably wouldn’t have minded the first part.”  Another was attracted to the girl, but she seemed too “goody, goody,” and he wasn’t up for that.  One guy was focused more on a girl’s overall attitude. “I don’t go after (women) who lack self-esteem or confidence in themselves.”

Once I’d met a guy who I thought was pretty cool when I was out with friends at a bar.   He took my number and texted me a month later to tell me that he never pursued me because he could tell I was a really good girl, and he wasn’t looking for a relationship. At the time I was kinda miffed that he’d told me that at all, and it didn’t make much sense to me. Looking back now though,I guess it’s kinda  interesting to know.

Fact #2: He thinks she’s not worth the trouble. Some survey participants felt this way more than others.  Two specifically said that a girl playing too hard to get wasn’t worth the effort. “I’ve made the mistake of pursuing someone too hard before, and at this stage, if I don’t sense the person has some interest in me after a first few dates, I’ll let it go,” one guy said. Another added, “I would say playing hard to get gets old after the first 3 tough approaches.”

In addition, girls who are too much work as far as “making it work,” are inevitably left behind.  One guy described a situation where a girl flipped out after the first date disproportionate to his crime of a one-day delayed phone call.  Then he decided he probably wouldn’t need to call her ever again. Some of our pollsters expressed frustration with girls who were too different from what they want. If a guy’s personality or values don’t line up with a girl’s, she’s work to maintain or change.

Fact #3: He or she already has someone. Simply put, they’re spoken for or you’re taken.  If a girl is only dating someone, two of the guys said they might try to move in if they really liked the girl and they didn’t know her boyfriend. However most guys answering felt like they wouldn’t make a move if he thought a girl was unavailable.  Also if they are the ones in the relationship, they’re focused on the woman they’re with.

Fact #4: He thinks she seems too good.  If there’s going to be a reason not to be pursued, this is at least the most flattering. Hence, the apple analogy. Truth be told, this does happen a lot. Even though it’s a traditional role for men to ask women out, they have nerves and doubts too.  “Usually guys are intimidated when (girls) are smoking hot,” one subject said. Most guys have one story about going for a girl like who they felt was out of their league.  They very clearly remember it not working out.  Everyone’s been turned down at least once, and guys learn their lesson pretty quickly that rejection isn’t an experience they want to repeat.

“I can look back and say (I was) oblivious to the fact that they were interested. I would have gone for her or could have been with her if I had picked up the signs,” he listed a few reasons including friendship, another relationship or ” because they were so attractive that I didn’t think I had a chance… but I did. That happens.” Even though this seems frustrating on the receiving end of things, it’s understandable. People play it safe all the time to avoid getting hurt and dating is certainly no exception.

A few years ago I was in my first year of grad school in Oklahoma, and I was one of two people in a class of over 60 who were not married or in a serious relationship. In a completely platonic conversation, one of my married classmates asked me why I wasn’t dating anyone.  I was getting pretty sick of that question and honestly had no good answer for him so I just kind of shrugged and smiled, hoping to get on with the project. He told me maybe the nicest thing I ever heard. He told me I was pretty, fun and smart, and that when he was single, he wouldn’t have asked me out because I’m too intimidating.  He said I was easy to be a friend with, but that I seemed too good to get, and that’s why I had so many guy friends.  He told me I was a catch. Through my rejections and disappointments, his words (when I’m lucky enough to remember them) give me so much comfort. More than apples in trees, for sure.

Fact #5: He’s oblivious.  Whether he doesn’t see the signs, doesn’t trust the signs, or has only seen you in friend context, this one is his fault. Men, you really need to work on fact #5.  Years of asking girls out and running into bitches along the way is rough, we all understand, but suck it up.  It’s just like we used to say in soccer practice- we win and lose everyday. It’s part of playing and trying. So stop ignoring us when we try to tell you we’re into you.

My new and improved not getting picked analogy Here it is! Based on direct feedback from the gracious gentlemen themselves, this is your less sappy more logical analogy for how girls are picked (or not). This struck me last week with all the Mega Millions news.  Some people were rushing out like mad men to scoop up tickets, while others logically reasoned that there was no point in entering a contest that already had so many people trying to win and such a small chance of success. I think it’s appropriate. After all, a good girl can be just as rare as a jackpot.