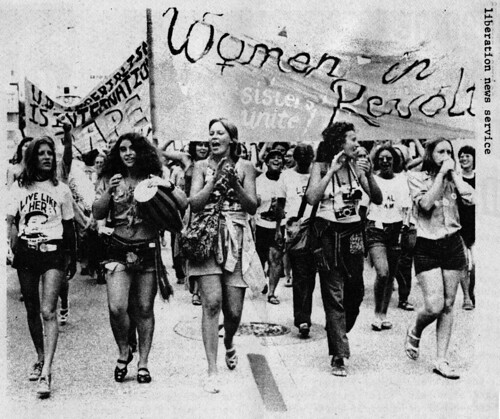 Saturday is our time to shine! Let’s take part in the most historically American thing to do: taking charge of our own lives

Prepare to raise your fists in the air because I’m Not Going To Take It Anymore Day is coming up this Saturday, January the 7th.  This has got to be the best holiday we are forgetting to celebrate, and it could not have better timing. As Americans, Twisted Sister’s, “We’re not going to take it” might as well be our national anthem, because protest and revolt is as American as apple pie.*  Whether it’s speaking out in a crowded public forum, speaking up in your relationship, or even just shutting down those harmful voices in your own mind, Saturday is your chance to use your voice and your actions in the most impactful ways possible.

I asked strangers around the city of Lexington and friends in online chats from around the country about their thoughts and experiences on the topic.  What they gave me was an inspired day full of stories of hope and empowerment. Here are their words to give us all ideas of Saturday festivities.

Have you ever made a change because you thought, “I’m not going to take this anymore”?

I left a job once because of how the company allowed customers to mistreat employees.

When I changed jobs… I was tired of working under such a good ol’ boys sort of management where I could tell that because I was a woman my opinions were not valued. You know there were instances where our medical director, despite the fact that he saw me at least 3 days a week had no idea what my name was. I went and asked a valid question about when some work was going to be done and they were like, ‘Oh, of course the next day.’ It was construction work. I was like, ‘have you ever dealt with construction? Because I can tell ya, things don’t happen that fast. I just didn’t like that. I didn’t like being in an environment where I didn’t feel supported or valued. So, I looked for a new job and I’m very happy with my new job.

Recently it was the election. I simply got to the point where I was finished arguing with people. Debating facts is tedious and not fun, so I started cutting people out of my life who simply didn’t want to hear that I didn’t care about their opinion.  Oh – quitting smoking is another good example. I went cold turkey based on “can’t take it anymore.’

It was because I was sick of not feeling healthy but making excuses instead of making an effort. So I changed and began to make the effort.

The first thing that comes to mind is my health. In terms of I felt like I was not feeling healthy, not feeling good, it made me really cranky. And so I cut out of a lot of unhealthy bad foods. It made a difference.

Yes. Certain friendships or relationships that you know are toxic that you make decisions to not be in those relationships anymore, at least not to be as invested anymore.

I tried to stop drinking several times over the past 4 years and finally committed and making it work back in May. I’m now 7 months, 13 days sober. I got tired of being hung over and dealing with the emotional strife my drinking problem was causing me. I see a counselor once a week and attend meetings on Saturday mornings.

I broke up with an abusive boyfriend.

I don’t think anything too extreme, it’s been smaller things with school or with work. Kind of like, I’m not going to take myself doing something any more or I’m going to change something about myself.

I stopped being quiet around people saying racist bullshit- family, friends etcetera. Left jobs that were bullshit and I couldn’t take anymore. Stopped doing all the work to keep relationship ships alive with old friends that don’t put any effort in.

I have quit two jobs because I felt that my bosses were not respectful of me. I have changed how I respond in relationships because I didn’t like the way that my partner was talking to me and had power over me.

Is there anything in your world or life now that you can’t take anymore, and what do you think you can do to change it?

One big problem here is the homeless population and how they’re treated here in Lexington, which is tough for us as a business to know what to do exactly, but I would love to be able to help change that for the better. I think it’s not necessarily just providing things for them, but just treating them as normal people, or especially those with mental issues, giving them help. Things like that.

I’m a super messy person. My house is a mess. When I last moved I got rid of a lot of stuff cause I’m just like look, I can’t take this anymore. I’m not moving with all this stuff. I’m going to live a minimalist life. It’s just going to be really nice, it’s going to be really neat and organized and it just has not happened. I just graduated from school and it’s just one of those things, I now finally have time. I’m going to do this. I’m going to make this change.

I often think of moving out West because I am increasingly tired of this region’s lack of innovative culture.

I don’t know if it is really big in the sense of “I can’t take it anymore” but I really don’t like how find myself having social media sucking time away. So I’m cutting some of the easier ways to access. For example, I removed my Facebook app so I don’t get notifications.

The one thing I can’t take is that it’s not cold enough yet, but I can’t really do anything to change that. If it’s gonna be cold, just go ahead and get cold.

I think the latest thing is eating crap. So I’m going to change that. I can’t eat anymore crap, after the holidays were so bad. So, eating unhealthy meals- now I’m done with that. I’m going to probably make a grocery list instead of winging it, and go grocery shop for healthier stuff.

I got tired of a lot of the whining and complaining going on in our world today and so, I’m a photographer, so I’ve been talking about doing photo essays on kindness. Because you hear so much complaining and desperation and fear and rejection, all these things kind of welling up right now and you see this revolution of we’re going to make change, but you don’t feel change occurring. So I’m tired of hearing complaining and complaining myself. I want to see more kindness in our world. So, that is what I’m working on personally is interviewing people about kindness.

Through sobriety, going to counseling,and dealing with anger problems, I’ve learned that it’s easier to change myself than it is the world around me. The most we as individuals can control is ourselves, our actions, and the way we respond to things.

Currently, I feel very overwhelmed by the sadness and pain in the world. I work to stay ‘on top’ of world news. Knowing equals pain for me though. I also feel very helpless when i read about pain such as what is happening in Aleppo. Like, what can I do other than empathetically feel terrible? Reading about and experiencing the racism and sexism and capitalism that hurts people, including myself, everyday makes me feel like I am drowning. So I decided to keep learning about it, but to take deep breaths and then act in any way that I can. I changed how I looked at the problems. Now I see them as a constant flow in one direction and I respond by trying to contribute to a constant flow in another direction.

I can’t take this bullshit political system anymore. This flawed, oppressive, racist, sexist, system. And so I’m going to quit my job later this year and start fighting for a better one. Not sure how yet.

I can’t take annoying people at the grocery so I think I’m going to start using click list more. Just making changes where situations that annoy you don’t have to annoy you. Where if you can make a change where you’re not in a situation that’s frustrating to you, then you avoid it.

We are all strong in our own way. All we need is that push, that boost of confidence to tell us that we can overcome any obstacle that’s been holding us back.  Wherever we are, we don’t need to look far to find examples of people who stood up for themselves, who stand for their beliefs, and who can give us strength in numbers as we fight our own fights. Maybe we want to spend I’m Not Going to Take It Anymore Day on a soapbox or as a part of a protest.  Maybe we want to spend it packing bags or organizing. Maybe we just want to reflect on strength we can gain from our past and think about the possibilities for the future if we utilize that power. No matter how you choose to use the day, here’s wishing you a very spirited celebration.

*The band may not be down with that, seeing how they asked House Speaker Paul Ryan to cease using the song publicly because he stood for precisely the politics they were singing out against.