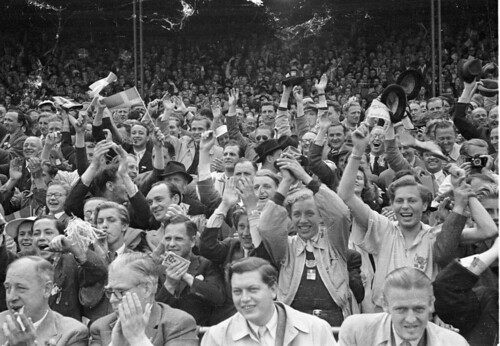 Cheer those heroes: we will not be bullied!

One day last year I was training a client in the gym and a news story about healthcare flashed on the television. My client, a very wealthy business owner, commented that Obamacare was killing small business and that if he had to pay healthcare for his employees, soon enough, he wouldn’t be able to afford personal training, and he pondered, where would that leave me, his trainer.
After he finished a slew of burpees and planks, I redirected his question. If my healthcare costs weren’t covered by my employer, if I couldn’t receive healthcare when I needed it, soon I wouldn’t be able to afford to be his trainer, and where would that leave him?
Today I was proud to see NFL players, coaches, and staff take a stand against a president who is affecting their finance, their health, their communities, their relationships, discrimination they face, their right to free speech, and specifically, their ability to do their job.
Predictably, some fans are outraged. Comments are that it is not the right time, not the right place, it is disrespectful. Calls for boycotting teams and the league dominate message boards and twitter feeds. Play the game and shut up. What are you complaining about you spoiled, pampered, famous athlete? (I won’t go into the abundant fallacies and misconceptions of this last statement, although that is what I’ve spent a good part of the last 5 years studying).
Our country needs to get over “the customer is always right,” “don’t bite the hand that feeds you” mindset. This is a relationship. Fans can’t watch their game and wave their banners without talented and dedicated athletes. Players cannot afford to be talented athletes without fan support, and the support of the society they live in. What holds athletes back, holds their team and their fans back.
My client viewed my livelihood as the trickle down effect of his success. His ability to acquire health and fitness was because of his success, and no matter who sacrificed to give him the wealth he accrued, they would benefit in the end (and he explained that they have equal ability to go after wealth like his if they chose to do so).
However, if he considered how my access to knowledge, healthcare, and equality allowed me to even have and utilize my skill set, he might look at his lofty position a bit differently. I was available to support him because society supported me.
An athlete is no different, and despite their large paychecks, they are susceptible to the same inequalities and injustices as any one else in the 99%. They are reflecting social injustice that effects all of us. Thank goodness they are speaking out. This is an actual time we can legitimately call them heroes, someone for the kids to look up to.  They are sacrificing their well-being to speak up for those who can’t.  They are defying arguably the most powerful man in the world to speak out against oppression.
It is the right time.  Yesterday donald called for the sport to be more dangerous for players and for players to not have a right to voice their opinions by kneeling for the national anthem.  You have to respond to that. The statement was made with the intention of being responded to. If they did anything other than kneeling/standing in solidarity, their complacency would be speaking for a cause they did not believe in.
It is the right place.  Sport is where they were threatened.  While for anyone else, the game is a microcosm of life, for athletes, it is their life.  Fans attack players with slurs and heckling. NFL policy changes affect their salary, their future, and their health.  Inspiration, family life, and feelings of security affect focus, energy and mood. All of these things affect their ability to play the game, to “do their job.’ The president picked petty fights with them about their sport and their role in sport because that is where they are upheld as role models.  From anyone’s perspective, there is no clear line between sport and life when it comes to athletes.  Their playing field is the most appropriate venue for their protest.
We all have a multitude of factors that contribute to how we are able to live our lives, and none of them have clear lines around them.  Athletes can and should fight for what they believe and speak out whenever they see injustice for themselves or others in any area of their life, not just the one part we pay to see.
Same goes for Meryl Streep.